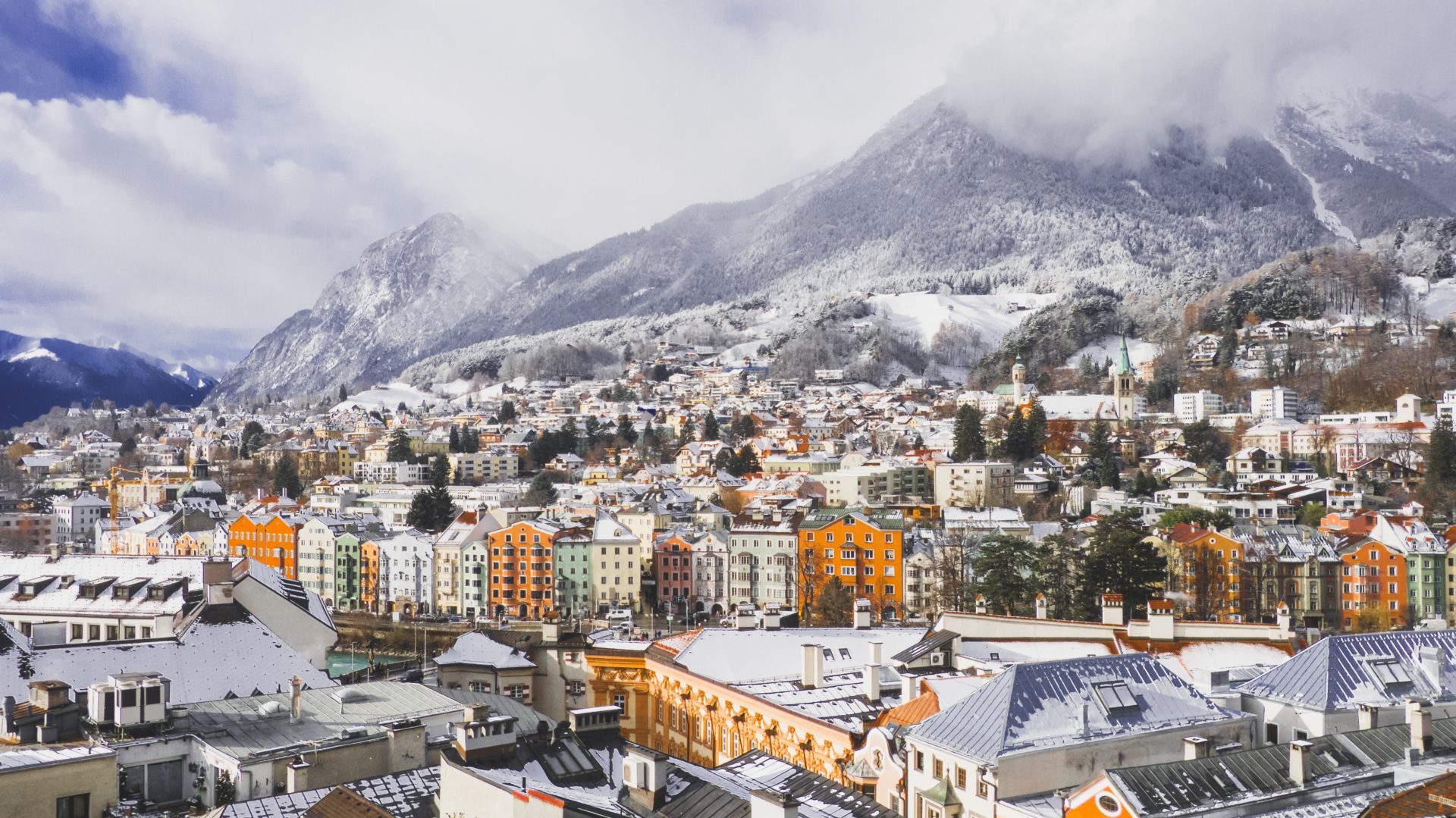 11 Relaxing Things to Do in Innsbruck with Kids

Vacations can get pretty hectic. Sometimes all you need is a place to relax, take in the views, people watch, and enjoy each other. Innsbruck is a great place to do just that. It’s small and quaint, and it’s ideal for a day trip with the kids from either Munich or Salzburg.

After a day in Salzburg, we took the train to Venice, Italy. But before we could get to warmer climates in Italy, we made a scheduled stop in Innsbruck, the capital city of the state of Tyrol in Western Austria.

Innsbruck — Picture Perfection in the Alps

Nestled in the Inn River Valley, Innsbruck is a gorgeous city surrounded by 3 alpine mountains: the Hafelekar to the north, and the Patscherkofel and Serles to the south. The Alps are literally front and center. And they add a magnificent backdrop to the already picturesque town since you can see the mountains from anywhere in Innsbruck.

Because of the mountains, Innsbruck is a winter sports mecca. The city hosted the 1964 and 1976 Winter Olympics, the 1984 and 1988 Winter Paralympics, and the first Winter Youth Olympics in 2012.

You can find the remnant infrastructure of the Games in the resorts and venues built for the games (like the Bergisel Ski Jump). Kids have a lot of fun exploring the legacy of the Winter Games in Innsbruck.

Things to Do in Innsbruck

Even though it’s the 5th largest city in Austria, Innsbruck is pretty small, believe it or not. Most things you’ll do in Innsbruck are within walking distance of the city center (or the main train station if you’re coming in for the day or a few hours). The best place to start (and maybe even finish) is Old Town Innsbruck.

We started our exploration in the center of Innsbruck. Just a short walk from the Innsbruck Hauptbahnhof (Main Station) got us to Old Town. Maria Theresa Street (Maria-Theresien-Straße) cuts through Old Town and creates a pedestrian-only zone north of Anichstraße.

Strolling through Innsbruck, you’ll pass quaint cafés, restaurants, shops, and even a mall lining the main street. Old Town is a great area to relax and get the kids some gelato if you’re there in the Summer (or hot chocolate in the Winter).

It’s also on Maria-Theresien-Straße that you’ll see one of Innsbruck’s most recognizable monuments the St. Anne’s Column.

If you continue north from St. Anne’s Column, you’ll eventually run into Innsbruck’s famous Golden Roof. The Roof, decorated with 2,657 fire-gilded copper tiles, was built for Emperor Maximilian I to mark his wedding to Bianca Maria Sforza. The Emperor and his wife used the balcony to watch events happening in the square below.

After seeing the Golden Roof, we headed back south and stopped at the Therisienbräu for authentic Tyrolean cuisine.

For 360° views of Innsbruck, take the Nordkette cable car to Karwendel Nature Park, Austria’s largest nature park. The ride up the north range is just 20 minutes. Once you get to Seegrube at 6,250 feet, don’t rush to the next thing. Relax, unwind, take in the beautiful views, or hike the Panoramic Trail.

When you go up the Nordkette, you first have to take the Hungerburg cable car from Innsbruck’s city center to Hermann Buhl Platz. Then cross the square and take the cable car to Seegrube or go even higher to the summit of the Halefekar at 7,401 feet above sea level.

The Nordkette cable car also lets you easily reach Alpenzoo from Old Town. The highest zoo in Europe, Alpenzoo is unique in that it’s home to more than 2,000 animals that are indigenous to the Alpine region.

After you’ve had your fill of zoo animals, head across the street to the playground where the kids can play and you can get a chance to enjoy the view from the top.

Located on Bergisel hill, the Ski Jump is a purpose-built venue with seating for 26,000 spectators. Athletes began competing at Bergisel in the 1920s on a wooden ramp. The larger hill was first built in 1930 and was rebuilt before the 1964 Winter Olympics for the individual large hill event (it hosted the Games again in 1976). The current jump and venue were completed in 2003 to accommodate the sport’s most recent rule changes.

You can easily get to Bergisel from Innsbruck through the Tram 1, stopping at Station Bergisel. Once you arrive, take the elevator ride to the top. Even if your kids are not Olympic hopefuls, you can still enjoy the fantastic views of Innsbruck from Bergisel.

The only artificial ice bobsled track in Austria is located in Igls, just a 20-minute bus ride from Innsbruck (from Innsbruck’s train station, take Bus 4141). The track was built for the 1976 Winter Games and continues to host bobsled, luge, and skeleton competitions including the World Cup.

But the Olympic Ice Track isn’t just for professionals. Visitors, including children, can also experience the rush of going down the track at 75 mph. You can choose to join a professional driver in a five-man bobsled or go down the slope head-first on a skeleton. If you or your kids (18 and older) want a truly unique experience, you can speed down the track on a wok (yes, a real wok!).

Bobsled runs are available most of the year, including in the Summer.

Around the tomb, you’ll also find 28 bronze statues of the Emperor’s ancestors and contemporaries, including Count Albrecht IV of Habsburg and King Arthur of England.

Located in the Domplatz, the Cathedral of St. James (now Innsbruck Cathedral) is unmissable with its two green-domed bell towers. Inside the church, you’ll see the ceiling paintings depicting St. James and the gold and marble main altar.

The medieval fortress turned into Renaissance castle is one of the most popular attractions in Innsbruck. Ambras Castle was the 16th century home to Archduke Ferdinand II and his family. The castle and grounds stand in the southern part of Innsbruck and can be reached by both tram and bus.

When you visit Ambras Castle, you can’t miss the Spanish Hall, a beautiful, gold-adorned hall displaying 27 full-figure portraits of Hapsburg rulers. Another stop the kids will love is the Chamber of Art and Curiosities. The Chamber has an assortment of bizarre objects like depictions of the crucifixion in coral, paintings on cobwebs, giant playing cards, stuffed sharks, and deer horns embedded in a tree trunk. You know? The typical Renaissance furnishings…

Originally built in 1460, Hofburg (Imperial Palace) is one of the 3 most significant buildings in Austria and was a palace of the Hapsburg dynasty for more than 450 years. The Hapsburgs, one of the most influential and distinguished royal families in Europe, shaped most of what we know in the continent today. After hundreds of years of expansions and renovations, Hofburg now has 5 themed museum areas:

Just outside Innsbruck, Swarovski Crystal Worlds is a museum and art gallery dedicated to showcasing crystals. Its highlights include the Crystal Dome, the Crystal Theatre, and the Crystal Forest installations, displaying art pieces made by artists from all over the world. Outside, you’ll find the iconic Giant, a large landscaped waterfall in the shape of a human head gushing water from its mouth.

You can visit on your own or get a Swarovski Crystal Worlds Admission Ticket which includes shuttle transfer from Innsbruck.

With its picturesque views and amazing hospitality, Innsbruck easily makes it on the list of must-see cities in Central Europe. You don’t have to stay in Innsbruck because you can easily spend the day there as a day trip from Munich or Salzburg. You can stop in, like we did, on your way elsewhere.

If skiing s what you’re looking for, Innsbruck has all the slopes and resorts you’ll need. The city is no stranger to playing host, so you’ll definitely be able to find family-friendly resorts and amenities to make your ski trip a breeze.

Either way, don’t miss out on the opportunity to take the kids to explore one of the gems of the Alps in Innsbruck. 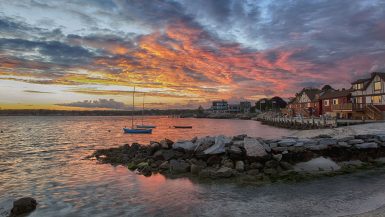